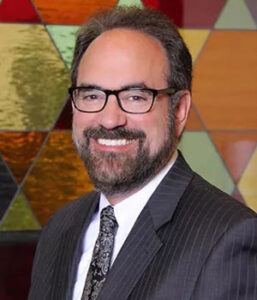 Our Rabbi is the spiritual leader of our Congregation and a leader in creating a vibrant Jewish community in Southern Nevada.

Sanford Akselrad has served as the spiritual leader of Congregation Ner Tamid since he came to Las Vegas in 1988.  During this time, the Synagogue grew from approximately 60 to over 600 families, becoming the largest Reform Synagogue in the State of Nevada. In his 30 years of service to our Congregation, Rabbi Akselrad has served on a wide variety of community boards including the Humana Hospital Pastoral Advisory Board, the Jewish Nevada, Jewish Family Services and the National Conference of Community and Justice.

A firm believer in K’lal Israel and building a strong Jewish community, Rabbi Akselrad has spearheaded many community-wide Boards, Commissions and organizations that have helped shape the Jewish community we live in today. He is a founding member and current President of the Clark County Board of Rabbis. He is also a founding member and past Chair of the National Conference of Community and Justice’s Interfaith Council and of the Federation’s Community Relations Council (CRC).  Rabbi Akselrad also spear-headed the effort to bring the Interfaith Hospitality Network model of sheltering homeless families to Las Vegas. Now called Family Promise, this model uses the facilities and volunteers from local faith communities to shelter, feed and encourage homeless families to live with dignity and hope, and ultimately end their period of homelessness.

In the wake of the Great Recession of the late 2000’s, Rabbi Akselrad envisioned Project Ezra, a partnership between the Jewish Federation of Las Vegas, the Board of Rabbis, and Jewish Family Service Agency. Project Ezra helped over 600 people of all faiths secure new employment during this challenging economic climate.

Rabbi Akselrad is currently a board member of the Anti-Defamation League of Las Vegas and the Interfaith Council of Southern Nevada. Rabbi Akselrad has served on the National Commission on Jewish Living, Worship and Music for the Union of Reform Judaism (URJ) for over ten years. He has also served on the Outreach Committee (to interfaith families) of the URJ.

Rabbi Akselrad was ordained from the Hebrew Union College-Jewish Institute of Religion in 1984. His rabbinic thesis dealt with the moral implications of the Holocaust and how the Holocaust is taught in public and private schools.  Because of his expertise, Rabbi Akselrad helped form the Governor’s Council on Holocaust Education, and he faithfully served as a member of that Board for over twenty five years.

Through his involvement in the interfaith community, he has been a constant presence in Interfaith forums, and the co-founder of the annual Interfaith Thanksgiving service.

Rabbi is married to Joni and has two children, CJ and Sam. His daughter-in-law is Ana and his granddaughter is Genevieve. 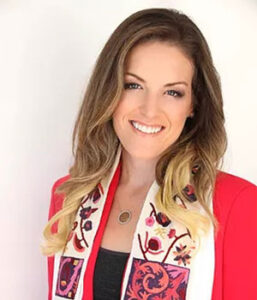 Warmly welcomed by our Congregation, Cantor Hutchings joined the synagogue in 2014.

A national award-winning educator, Cantor Jessica Hutchings has spent almost a decade conveying the beauty of Jewish music to children and adults in Southern California as well as Las Vegas. Cantor Hutchings did her undergraduate work at California State University, Long Beach’s Bob Cole Conservatory from which she received a Bachelor of Music degree with an emphasis in Vocal Performance and a concentration in Opera. She then continued her studies at the American Jewish University’s Fingerhut School of Education, receiving a Bachelor’s in Literature in Hebrew Letters as well as a Master’s of Arts in Education. In May 2014, Ms. Hutchings was ordained as a Chazzan/Cantor and received a second Master’s in Jewish Sacred Music from the Academy for Jewish Religion, CA.

Cantor Hutchings has worked as a Hebrew and post-B’nai Mitzvah teacher at Congregation B’nai Tzedek (Fountain Valley, CA), a Cantorial Soloist at Valley Outreach Synagogue (Las Vegas, NV), a B’nai Mitzvah coordinator at Temple Shalom of the South Bay (Hermosa Beach, CA) and as the Youth Director (grades 3-12) of Congregation Tikvat Jacob (Manhattan Beach, CA). A long-time educator and Guest Cantor at Temple Israel (Long Beach, CA), she also was a Guest Instructor there teaching an Adult Education class entitled “Contemporary Jewish Music.” Between 2010-2014, Cantor Hutchings served as the Cantorial Soloist and Director of Music Programming and Education at Temple Menorah (Redondo Beach, CA). In addition to co-leading all Shabbat and holiday services as well as the B’nai Mitzvah, Cantor Hutchings established and directed the Kol Hakavod youth choir, established Jews Next Dor, a young adults social chavurah for singles and couples ages 21-36, an adult choir and band, and worked with the Director of Education to develop and implement music curriculum. Cantor Hutchings’ renown as a superlative Jewish educator received national validation in 2009, when she won the national Grinspoon-Steinhardt Excellence in Jewish Education Award for being an “Exceptional Teacher, Mentor and Leader.” That same year, she also received the Smotrich Family Foundation Educator Award. Cantor Hutchings has performed in a number of major concerts all over the world, from Carnegie Hall in NYC to historic venues in Europe, of both Jewish and secular music. And she also proudly sang the National Anthem at a Los Angeles Dodgers game as well as at two games of the Los Angeles Kings.

In July of 2014, Jessica, her husband Jeremy, and their two dogs: Matzah Ball and Latke, moved back to Las Vegas so that she could begin her tenure